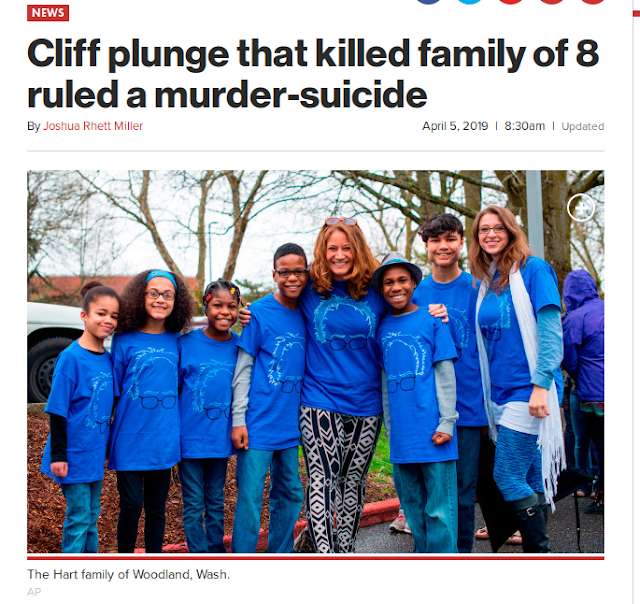 Another horrific case of murder-sucide by lesbian couple from Washington state has concluded.

Disturbing accusations of long-term abuse and neglect of the children emerged after the crash.


There were many signs that things were not right with the family, investigators said.

Court and welfare records revealed six prior allegations of child abuse and neglect dating to the Harts’ marriage in 2009.

“Wherever these ladies would go there were always allegations of abuse from the community toward the ladies and the children,” Slates said during his testimony on Thursday.

He said one incident occurred in 2011 when Abigail’s elementary school reported extensive injuries to the child. The 6-year-old girl told investigators that she had been accused of stealing a penny and that Jennifer had beaten her and dunked her head underwater to get her to confess.

Slates said he doesn’t believe the Harts set out on their trip to California planning to kill themselves and their children, but at some point while driving around “they both decided that this was going to be the end ... that if they couldn’t have their kids, that nobody was going to have those kids.” 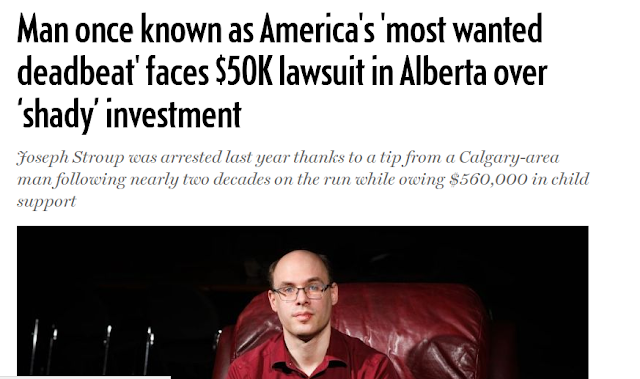 The case against Joseph Stroup (aka "America's Most Wanted Deadbeat Dad") in Calgary has grown even stranger in the year since his capture.   He managed to hide in Canada for 20yrs before his false cover was blown in an incident where he attempted to scam a bartender and was reported.

Now it appears he may have also scammed an IT Specialist in an Investment Fraud.

It is unlikely that today Stroup could have avoided detection with all the tools NOW available to the Police and MEP - or that his case would not have been acted upon.   Or at least I hope so.

Manginas and Feminists in display of breath-taking misandry make an adulatory Documentary of Lorena Bobbitt!

Dr Janice Fiamego identifies the serious illness within Feminism in their worship of male mutilators.

On June 23, 1993 after almost 5yrs of marriage, Lorena Bobbitt chopped off her husband's dick while he slept.   As she drove away from the crime scene she  threw his severed penis into a field.  After a few hours she finally told the police the location so it could be retrieved and re-attached.

At her trial she claimed he abused her regularly and on the night in question he had raped her.   Did it not occur to her that maybe a better course of action rather than this vile crime was for her to demand Counselling or even just leave? Is that too much to ask of a fully-formed adult?  But no - clearly delirious with rage she committed this horrible mutilation.   At trial she was found "Not Guilty" by reason of Insanity and sentenced to 45 days in a Mental Hospital for treatment.

This lenient treatment obviously encouraged other deranged women to practice the same sort of grisly abuse on their boyfriends and husbands secure in the knowledge that the Courts accepted their justifications with barely a whisper of opposition.  And there were many in the news over the next decade.

Of particular note was Catherine Kieu-Becker who on July 11, 2011 did EXACTLY THE SAME CRIME against HER husband - but so his penis could not be re-attached by surgery afterwards put his cut-off member in a blender so it would be totally mutilated.

Can anyone imagine the outrage if a husband had done something like this to his girlfriend or wife?   I think it likely that he would die in custody and/or be hung, drawn and quartered by a mob attack.

Soon after this hit the news Sharon Osbourne one of the 5 hosts on afternoon female infotainment program called "The Talk" by CBS made these disgusting remarks to gales of laughter and virtually no disagreement by the other 4 female "hosts" (except Lesbian Sara Gilbert).

And yet half the world (the male half) gets lectured by the American Psychological Association about the "problem" of Toxic Masculinity.
at 2/06/2019 12:16:00 AM No comments:

In record time (24hrs) most men have heard about the ad slur and begun to #BoycottGillette - thanks Proctor and Gamble!  (They own the Gillette brand).

Unfortunately the main alternative (IMHO) Dollar Shave Club who built their business with a hilarious online marketing video - was purchased by Unilever in 2016 for $1bn from the smart guy who started it - and the main competition against them now is Harry's run by 2 serious Mangina's - so what is the choice?

Sydney MGTOW had a good run-down but I really enjoyed Mark Dice's take:

UPDATE (Jan 16, 2019):  I have learnt that old U.S brand-name Barbasol was acquired from Pfizer in 2016 and re-launched by a God-fearing family businessman in Ohio.  If this is not MAGA I don't know what is.

AND they have a Dollar Shave Club!

Plus there has been an amazing avalanche of videos from every single  Conservative commentator on the web PLUS Tucker Carlsen on Fox!
at 1/15/2019 11:55:00 AM No comments: 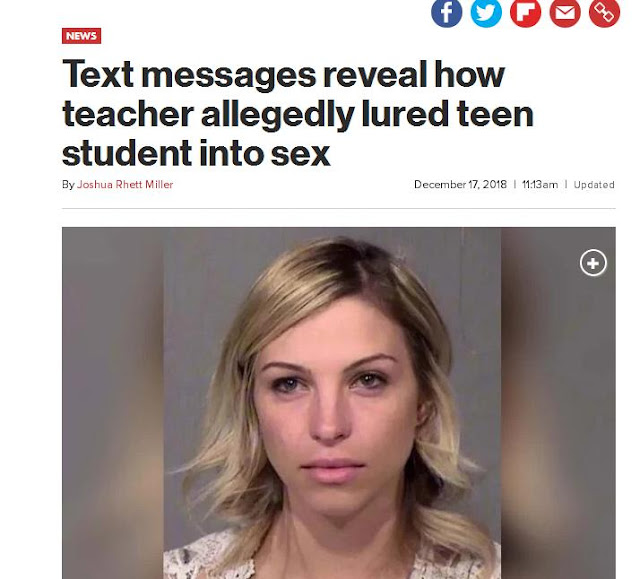 Arizona Grade 6 Teacher Brittany Zamora  (married and 27 yrs old) performed oral sex on one of her 13yr old students at least 3 times, had sex with him in her car during secret trysts and shared nude photo's and "pursued" the young boy repeatedly over 3mths while he was a student at their school.   The boys parents intercepted some of her text messages and discovered she was calling their son at home and confronted Zamora on a call - recording her comments.  She was intercepted by Police on her way to the Las Brisas school to rendez-vous with the boy.

This is an all-to-common assault on boys - and I am convinced most is undetected.  It does not even begin to address what I feel is the lesbian indoctrination by female teachers/professors. 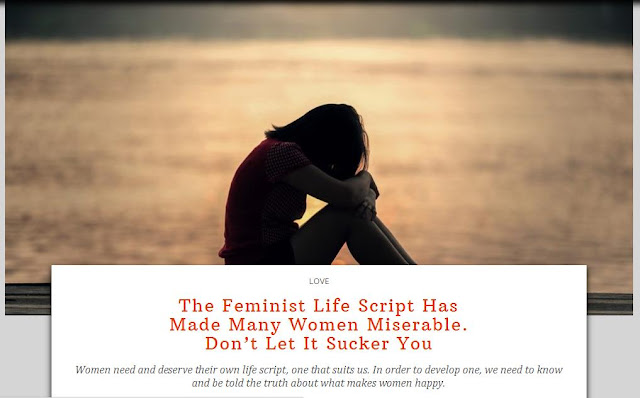 I saw this article for women in The Federalist and as well as having a Dr Jordan Peterson "advice" video for young women.  I highly recommend for all - but especially women.   Of course it does nothing to suggest HOW but that is another part of the challenge. 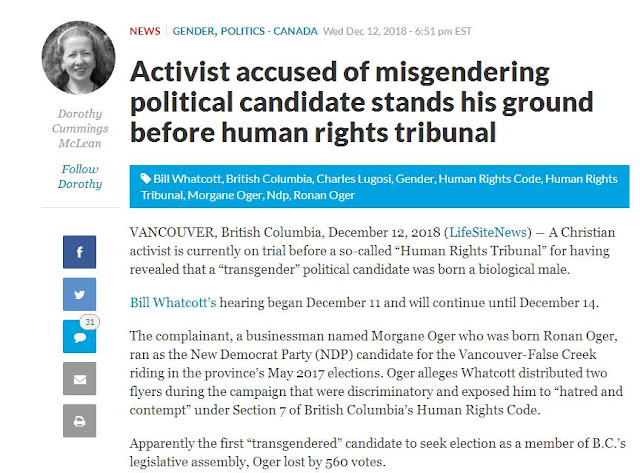 Little recognized Pro-Life activist and Canadian Christian - Bill Whatcott - has (supposedly) just finished his Kangaroo Hearing in front of the BC Human Rights Tribunal.   It is a complete farce of course.

The whole issue was properly summarized in one of this year "Blockbuster" Interview's by Dr Jordan Peterson on BBC (he clearly addresses his opposition to "compelled speech" regarding trans-genders at 5m45sec).

And of course the REAL reason why this case is requiring reminds me of this scene from popular animated movie "A Bugs Life" where the tyrannical, jack-booted Locust Leader discusses why his crew must go back and deal with one solitary misfit opponent named Flik,

It also brought to mind a video I saw recently from talented commentator Devon Stack of Black Pilled on the nature of conformity.


Finally I saw this article also from B.C.where "Single Mom's"are mounting a challenge to the practice of clawing back unpaid Social Support by attachment to Child Support payments - normally imposed by Family Courts in Divorce Settlement or Commmon-Law Family Breakdowns.

It is a very interesting idea that may have important implications for Fathers who normally (in 96% of cases) have to pay the Child Support.

IMHO it also opens up a very foggy area of Family Law.

What "counts" as a payment to "Single Mom's".   There has been a long-standing racket in Alberta (and I believe B.C as well) where typically "Single Mom's" who are not getting their Child Support payments on a regular basis (especially if young native women) that they find themselves magically "recruited"by Family and Social Services as "Caregivers" for Native Foster Children who may have been apprehended by the Province. (Alberta, Saskatchewan and Manitoba have among the highest rates of  indigenous child apprehensions in North America!)

None of the "payments" are considered "taxable income" for the women although they typically are paid a generous "per diem" for care, occupation (if the kid lives with them), transportation and other ancillary expenses such as Xmas and Birthday gifts.  It is all considered taxable income to the (normally minor) child. 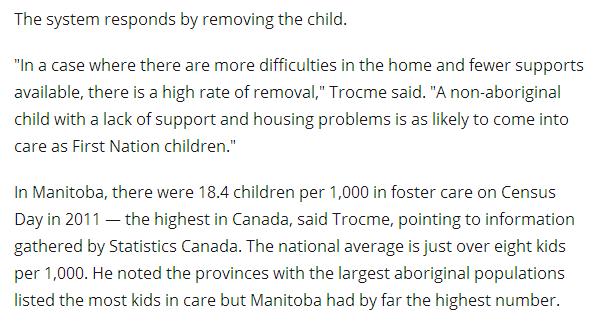 This allows many "Single Mom's" to receive generous remuneration for "Foster Care" services without actually having to report any "Taxable Income" that may compromise the calculation of their Child Support.

Self-admitted "Progressive Democrat" David Garrow has penned an exhaustive biography of Barack Obama, unearthing a number of surprises about Obama that he suggests "should have been uncovered before the 2007/8 Election if Journalists were doing their jobs".

He also has made the spectacular assessment that he finds Obama a "hollow man" for not following many of his (supposed) principles when he became President - notably opposition to the CIA, The Patriot Act etc.

These are stunning assertions made by a well-recognized Democratic Journalist.    The Democratic Party needs to examine why and how this occured.

(Thank-you Joe, obviously self-reflection is not a Democratic virtue but this will make the 2020 Campaign so much easier.)

New Crowd-Funded movie explores the dishonesty of Roe vs Wade - 52 years later.    And how Tech Titan Facebook tried to stop the fundraising and promotion of the film.   It was dishonesty then but pure censorship today. 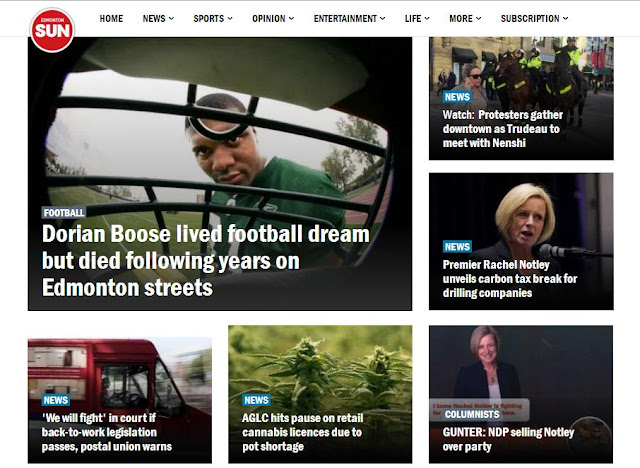 The Grey Cup is to be held in Edmonton this year featuring Calgary Stampeders vs Ottawa Red Blacks and it seems it will be a relatively temperate event outside at Commonwealth Stadium (Sunday Nov 25 Forecast is Mainly Sunny -2C feels like -4C with light 11km/hr winds).

Also Nov 22 marks the shocking news of former Edmonton Eskimo Dorian Boose death in 2016 that was FINALLY disclosed as suicide with a long profile of the life, times and career of this gentle giant player.  This was (of course given the "modern" media policy of not mentioning suicides due to so-called "copy-cat" behaviour) NOT  mentioned at the time as the city was just dealing with the disappointment of being knocked-out of the 2016 Grey Cup.

Dorian was a talented giant of a player from nearby Washington State and made solid contributions to the team but it is revealed in this article that he had CTE (Chronic Traumatic Encephalopathy) a brain trauma that we all know is becoming all-too common effect in aging pro football players.   I include below a "tribute" video about Dorian Boose and PDF of article for posterity sake. 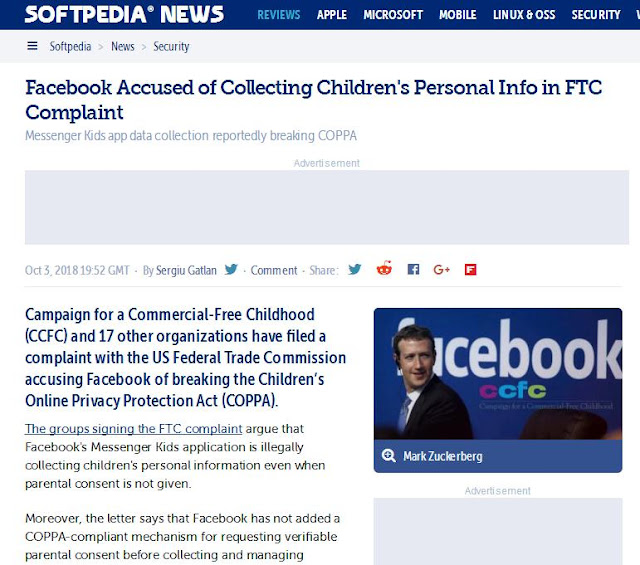 It never ends.  A new FB indignity where it appears to have been caught breaking Childrens Online Privacy Act in the U.S.A.   Zuckerberg either has no idea what his staff is doing, doesn't really care or has no incentive to uncover them and set clear rules for operating at FB.

I strongly suspect it really doesn't matter.  Given all of the revelations over last 2 years there is more than enough evidence to nail everybody's ass to the wall for gross personal privacy violations.
at 10/03/2018 04:02:00 PM No comments:

How long has he been POTUS?

Men who took their lives (or had them unfairly taken) 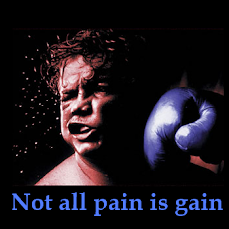 Disclaimer: All opinions expressed are my own and do not reflect any organization I am affiliated with/to. Please direct any questions or comments to me at fathers4fairness [at] gmail.com